Damn it. I guess I am growing up. What fun is that?

Tim Schrick is not the Stig. Or at least the only one.

I’m finally got to use my new toy on Sunday morning. What is it you ask? It is a Smith and Wesson Sigma .40. It may prove to be the most wildly in-accurate gun I have ever shot. At 7 yards, 4 different people shot at a paper target and no one has any clue where the shots were going. Sickening. I took it apart last night and made sure the spring was centered and that the barrel looks clean so maybe next time out it won’t suck. .40 ammo is not cheap- about $17 for 50 rounds, so it would be a true waste to have it be useless.

Canada is going to try and ask the border guards to check iPods and the like for infringing material. Um… how? If I move all of my CDs onto my iPod I am still qualifying for fair use. How do they know if I still have the CD or if I borrowed it or if I downloaded it from limewire? You really can’t tell one way or the other. Irritating.

Neat article about the changing demographics of stray dogs in Moscow. Even the dogs are adapting to the changing Russian society- including stopping at lights to let traffic go and riding the subway.

Have a great Thursday everyone. The weekend is almost here, I can nearly taste it.

Grisoft has a new version of their virus scanner out, AVG 8.0. I spent a bit of time installing it today on my laptop and found a big annoyance: by default it actively scans all of the web pages you visit and every link on those pages for “malicious” code. The intent is nice- make sure I don’t go to a web page that will infect my computer. BUT I don’t like it one bit. It slows down and clutters up my web experience by modifying the pages I am on with little green check marks and pop-ups to let me know the link is safe. In addition I use Firefox with no flash, no java, and no active-x controls. This severely limits the way malicious code can run.

How to fix it? First, uninstall AVG 8.0 and reboot. Then you need to run the installer from a command line with these arguments:

Obviously if you have a different installer executable version, use that. This will start up like the normal installer and once installed, it will update and scan just like the full version- only without “SafeSurf” and “SafeSearch”.

Lozo over at Why Don’t We Get Drunk and Blog? is reminiscing about his blogging past and brought up, what I feel is, one of the best blog posts ever.

It is just amazing how accurate it is. I often find myself at the bar sitting near a GSF and thinking- yep there is a wading pool’s worth of depth in that one’s sports fandom.

Give it a read, I promise you will enjoy it. Double your money back if you don’t.

I am currently running Fedora in a few places. Fedora 9 was recently released and I decided it was time to upgrade.

It is a pretty simple process using RPM and yum.

First make sure the repository is up to date and clean.
yum update
yum clean all

Lot and lots of packages need to be updated, so time to update
yum update -y

Unfortunately there was a conflict during the transaction test with compat-db and passwd. It looks like this:
file /usr/include/db4.2.52/db.h from install of compat-db-4.5.20-5.fc9.x86_64 conflicts with file from package compat-db-4.5.20-3.fc8.i386
I cleaned up passwd manually by removing the older version and then upgrading the existing one.
rpm -e -vv passwd-0.73-1.i386
yum update passwd
Between those two, I made sure files from the newer package still existed and they did. So I moved onto compat-db:
rpm -e -vv compat-db-4.5.20-3.fc8.i386
yum update compat-db
This update does get 11 packages, but worked like a charm.

Because I am running in XEN, I don’t technically need a reboot- but I am doing one anyway to make sure.

Everything is running smoothly and on Fedora 9. Fantastic.

Have a great weekend everyone!

Posted by stevet on May 8, 2008
Posted in: Home Improvement.

Yep. I did it. I needed a reading chair so I headed off to Ikea tonight to see what they had.

I ended up with this: 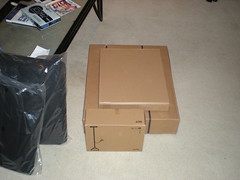 Yep. Boxes. Swedish boxes. Some time later and I ended up with this: 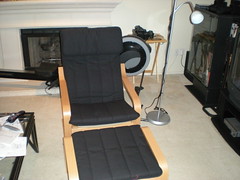 It is a Poang chair and ottoman along with a Not floor lamp. Pretty comfy and will work well for my needs.

I’m now officially a yuppie, as if I wasn’t before…

It is a bit different for me to write about WAM2 since I can sleep in my own bed rather than push one of the lil’ mooks out of theirs. But I’ll give it a whirl.

I took Friday off from work so I ducked out a bit early on Thursday. I had a little side work that needed doing and so I skipped dinner at Chuy’s and met the crew at the Dell Diamond for an Express game. We all walked up at about the same time and had seats just inside the main gate directly behind home plate. I had just been at the Diamond on Tuesday making this 50% more Express games in one year than I had ever done before. I did try to get one of the suites, but some other lucky bloke beat me to it. The game was a lot of fun and 50% off beers help a lot. Tee-time was early the next morning so we said our goodbyes and I went back to the house.

The next morning I made it to Crystal Falls with plenty of time to warm up. ScottMc and Greg were already there, but everyone else was apparently sleeping in. No bother, hit some balls, get a breakfast taco from the middle aged stoner at the snack shop and get ready for a wonderful way to spend a Friday morning. Scott, Greg and I did get paired up with a random lady who was a pretty solid golfer from El Paso (as an aside, we guessed she shot somewhere just south of 90). She put up with our antics including me running dead-nuts into a 24″ tree with my golf cart (one of *three* total on that hole). Yeah. Me Smart. S-M-R-T. I shot a slightly high 107 for the round. With my handicap I should have been closer to a 102 or 103. We got done and I headed home to clean up, I felt like crap and my head hurt so when it was time to head to the Salt Lick I did bail. I felt I would not have been good company and considering I am not good company when I don’t feel like ass…

Saturday was another early day for me. I totally forgot if we had a 9am or a 10am tee-time and the Lago Vista Golf Club is an easy 45 minutes from my house. Needless to say, it was 10am and I had a lot of time sitting around. The round was a lot of fun. Henry, Mrs. Mook, and I donked it up and shot a reasonable 2 over. I lost probably a dozen golf balls but got closest to the pin on 12. Ship It!

We all headed to the Big O with a minor detour because my cooler tipped over in the bed of the truck and the beer and soda went bouncing around. I lost two good Sam Adam’s summer brews that day because of “accidents”. People started to filter in and the grillables came out. I love those summer grill meals.

Poker started a bit after 7 and I never really got going. I made it to the final 14 or so before I had to push my big blind with A-8 and ran into K-K which then promptly flopped quads. The cash game was not too much later as the tourney got to the final table. I bought in very short- $20 into a 25c/50c NL game and hit Q-Q on the first two hands and got a stack going. CK has a good writeup on the biggest hand of the night which ended up being about $160 or so. I still had more than double my stack and maintained that until 3AM when pretty much everyone hit the wall. I said my “good-bye for nows” and headed to the house where I was wide awake at 8AM.

I was not sure if this year’s could prove better than last year’s but I feel it did. Thanks again to the Mookie Household for hosting and everyone who made it out that made it such a special event.

(Oh, and it looks like Astin has a crap load of pics up now, see Mookie’s home page for his flickr sets)

A beloved cardiologist died and was given an elaborate funeral.

A huge heart covered in flowers stood behind the casket during the service. Following the eulogy, the heart opened, and the casket rolled inside.

The heart then closed, sealing the doctor in the beautiful heart forever.

At that point, one of the mourners burst into laughter.

When all eyes stared at him, he said, ‘I’m sorry, I was just thinking of my own funeral………………I’m a gynecologist.’