Back to the promised land!

Finally! I made a great run at the weekly WWdN event on Stars tonight. I ended up 8th of 91.

I had to make some ballsy calls and ended up busting out on a flush draw that didn’t get there. The chip leader had turned a straight.

Feels good to play solid poker and have it payoff against a solid field.

Oddest part of the entire event? I never changed seats. Not once from the 10 tables that started to the final table. Pretty cool.

Final Results: FishyMcDonK won. It took almost 3 1/2 hours. Here is a screenshot of the final results:

Update. My favorite hand from last night is as follows. I have 99 on the SB. A mid-possition solid player makes it 4x the BB. It folds around to me and I call, as does the BB. The Flop comes out a very scary AAT. What are the odds he has a A? I think small. I bet out, about 1/2 the pot. BB folds. He goes in the tank. Requests time. The whole bit. He finally lays it down and claims KK. Ouch. I claim ace-rag to make him think he made the right call. I’m all about making people happy 🙂

Grinding it out on FullTilt

So I am trying to work off my bonus and Poker Tracker bonus on Full Tilt. I have something like 115 points left to clear PT and well, a bunch to clear the 100% bonus. It is basically grinding. I only have the bankroll to play .25/.50 which is fine- but I am not getting anywhere. Maybe I will head back to SnGs there, I had a hot streak that got ice cold recently.

Plugging away at the .50/$1 NL on Stars. I am making very good upward progress on my bankroll. I have awhile before I move up to the next level, but I think I found a game I am comfortable at.

Two full days (almost exactly) before I start heading to the airport to catch a plane to Vegas. Baby.

Mookie is having his weekly(ish) Online Event at Stars tomorrow night. Join us if you can:

After a very up and down weekend that basically netted me down a few SnGs worth of money, I had a very good night tonight.

I sat at a 50c/$1 NL table on stars and a bit more then doubled though when I hit quad kings on the river and had someone raise into me for a near $80 pot.

I then played a 6 top SnG on FullTilt where I busted 4th with a good draw that never made it but only had 12x the BB. Blinds made it to 50/100 with 5 people left.

Another 6 top. I laid low and watched a few crazy people duke it out. I ended up heads up with a 5 to 1 chip defecit but was able to battle it back to even with some smart betting and good hits. Including a semi-bluff where I had overs, a straight draw, and flush draw on the turn and re-raised all in. The other fellow folded claiming pocket 2s. That actually gave me 3 more outs than I had planned on. We were basically even when I had Qs 8h and the flop came K98 of spades. We both got it all in with the fellow having 10s 8d. No spades on the turn but a 10 on the river sealed it for me and I was out 2nd. (88 hands total)

All in all I am pleased with the night. Even though I missed the WWdN event that wwonka ended up winning.

Mookie is having another online event tommorrow on Stars. Hopefully more than 9 will show up this week. He is also hosting a bounty event on Saturday where I am currently first alternate but hoping to join in.

Vegas in 9 days. My first beer since Super Bowl Sunday in- imaging this, 9 days. 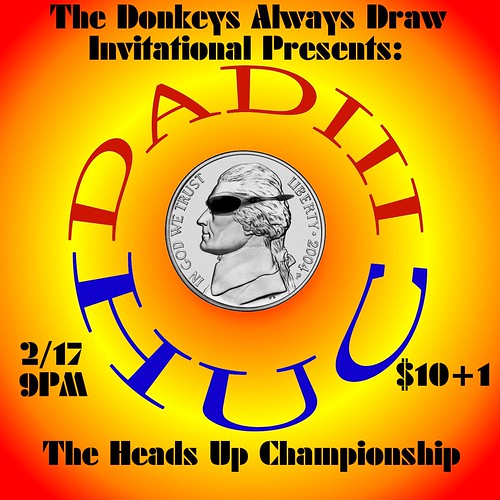 Played in basically 3 SnGs tonight. First two were 6 top ones on FullTilt. 6th and, well, 6th. Mookie had a Virtual Big O game on PokerStars. I ended up 9th when my top AK ran into QJ on a AJJ flop. Ooof. SirFWALGman made an appearance.

Plus side: I made my Stars buyin plus some playing 50c/$1 NL. So really I didn’t do badly overall tonight.

I just watched Top Gear’s Winter Olympics special. Holy Carp! That is some funny stuff. If you can find it, I highly recomend it.

WWdN gets me again…

I have moneyed once in the weekly WWdN event a few weeks back but have yet to return to the promised land since. Last week I was busted when my queens ran into kings and SERNE hit quads. I got to about the 50% mark. This week, I just didn’t get any steam at all. I was card dead for a l-o-n-g time and finally busted out when the blinds were 100/200 and I had 1200 or so in chips. My AQ ran into a AK and it was over, 27 of 54. Boo.

Part of my early tournament was distracted by a 6 top SnG on FullTilt that had me either 1st or 2nd in chips (it moved back and forth) and my intent was to win there. I find it really hard to two table SnGs or MTTs. Cash games, to me, are a lot more formulated where players move in and out and progressing blinds don’t happen. I ended up 2nd, but it was an epic heads up battle. One hand of note that I think I played well was AA on the 2nd hand of the event. I raised to 60 (4x BB) and was re-raised to 200. I re-raised all-in to 1500. Normally this would be considered too strong, especially early in the event. That is what I was hoping he would think. He called the bet with 88 and my aces held. This gave me a gunslinging perception with big cards. I bought many a pot when my AX or KX suited didn’t hit on the flop. No suckouts in heads up play, just good bets and better cards for my opponent. That means I have 2 1sts, 2 2nds, and 2 4ths in 6 6-top SnGs on FullTilt. Not bad.

Last Friday was Mookie’s bi-weekly home game. It was a $20 freezeout with 19 players. I ended up 12th. Ick. My 66 ran into Mookie’s TT when we were both really short stacked. Even though he doubled up (and left me with 2BB) he was *still* below average stack. I played solid, it just didn’t work out for me. Next time.

Some friends and I have gone on the wagon after the Super Bowl. Today marks 10 days. Which in itself would not be a big deal but… I also went on a diet and began doing a *lot* of walking. I have lost 6 lbs in the last week. Yikes. And to those who worry about my tolerance fading- don’t worry, Vegas is coming up. I’ll be back in true form the first weekend of March. 🙂

A short update about my play after WWdN on Tuesday.

I have played in a bit of 25c/50c razz. I now am beginning to understand how frustrating this game is. But I like it.

Since I signed onto FullTilt trying to earn my Poker Tracker licence via VPP, I have played in 3 6 top SnGs. I won two and finished 4th in the other. Pretty good ROI. I am in the low $5 ones because I don’t have the bank roll to support higher levels. My bonus will work off much quicker if I play higher levels so I am hoping to get enough bankroll in the next week or so to move up.

Live play at Mookie‘s tonight. $20 Freeze out. Should be fun.

I’m going to try to live blog here… this ought to be interesting.

After my brisk 4 mile walk tonight I sat down at ye ‘ol computer to play a bit of poker. Mookie is having his Big O online tourney and I have my Limit Challange to attend to.

Back on the Cash game. This concludes my live blogging. Not so hard when you only last 30 or so minutes.

Posted by stevet on February 2, 2006
Posted in: Random Rants.

This is quality entertainment.

Poker Related: Not too much. I had one really bad session on Tuesday, but made up some ground yesterday. In related news: I’m not ready to two table 25c/50c. Too much variation and not enough concentration. Stats updated on the right sidebar.